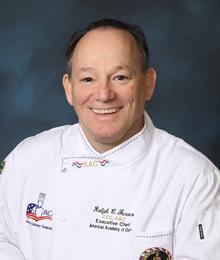 Executive Chef Ralph Feraco CEC, AAC the 2017 national winner of the Dr. L.J. Minor Chef Professionalism Award by the National Culinary Federation (ACF), exemplifies the highest standard of professionalism through certification, continuing education and training, culinary competitions, and community involvement. Feraco has been an ACF member for over 25 years, serving as president of the Caxambas Chapter of Naples and Marco Island from 2005 to 2009. In 2006, he was inducted into the American Academy of Chefs. He also is involved in the Naples Chaine de Rotisseurs.

Throughout his career, Chef Feraco has earned a variety of culinary recognitions, including a gold medal at the 2008 and 2009 ACF Culinary Cups, gold and silver medals at the international Culinary Olympics, and Chef of the Year honors from the ACF Caxambas Chapter (2004) and Long Island Chapter (1995).

Chef Feraco also is actively involved in the local community. He serves as an advisory board member of the Greater Naples YMCA, Culinary & Hospitality Education Foundation, and Lorenzo Walker Technical College. As a local ACF chapter president, he established a student membership program. He also provides guidance to students preparing for competitions and presents at the Golden Gate High School Academy of Culinary Arts.